In this article I am combining two products Lombok and Fluxtion to demonstrate how tools can reduce both the code written and time to delivery while improving the readability of the code. The use of var from java 10 improves the situation even further. Both products and var use inference at build time to accelerate development.

Fluxtion's ethos is to minimise waste, our goal here is to remove boiler plate code, reduce code-noise, and simplify integration tasks. We want to expends as little development time as possible while still delivering an efficient and high performance solution capable of processing millions of messages per second.

Using the techniques described I compare a Fluxtion/Lombok implementation to a scala example using Akka streams, the Java version requires less code and is simpler to build.

Housekeeping, apologies for not acknowledging Richard Warburton of Opsian, in my first blog.

When we code we address two main tasks:
Ideally we would like to spend all our time on the first and nothing on the second. Additionally the total volume of code written should be reduced as well. Balancing the abstraction while still empowering the developer is not easy, too greater an abstraction and we remove expressive power. I hope to strike a good balance with the approach taken in this article.

Imagine writing some tax calculation logic that takes 50 lines, but writing code for databases, webservers, marshalling, logging etc. requires 1000 lines. Although a demonstration of technical capability there is no business value in the purely technical implementation details. Viewing this from another angle we could see the business logic as a signal and the infrastructure code as noise. The solutions we write can be measured with a signal to noise ratio with respect to useful business logic.

Signal-to-noise ratio (abbreviated SNR or S/N) is a measure used in science and engineering that compares the level of a desired signal to the level of background noise. SNR is defined as the ratio of signal power to the noise power, often expressed in decibels. A ratio higher than 1:1 (greater than 0 dB) indicates more signal than noise.

It is desirable to aim for a high SNR ratio in most systems, in programming terms some of the advantages of a high SNR are:
In java we have felt this pressure for better code SNR over the years, moving from heavyweight j2ee container to simpler frameworks like spark and spring boot. The language itself has accommodated this shift by introducing changes such as lambdas, streams, method references and var variable declaration.

Before the example a quick primer on Fluxtion and Lombok.

Fluxtion is an embeddable streaming event processing engine written in Java. The developer describes the processing in a mixture of declarative and imperative forms so Fluxtion can generate a decision engine. The engine is serialised as java code and can be embedded in any java application. The application feeds events into the engine for stream processing.

Engine generation can happen inline in the application or as part of the build process with a maven plugin.

Just add Lombok to your maven build and your ide should just work, or it does with netbeans and intellij.

Lets look at a common Fluxtion usage pattern. Subscribe to a stream of events, extract a value from an event, perform a calculation on the value, filter and push a result into a user object. In this simple example we have the following requirements to meet:
Clone the repo from github and use this article's tagged version. The project is here.
git clone --branch  article_lombok_july2019 https://github.com/gregv12/articles.git
cd articles/2019/june/lombok/
mvn clean install

The Fluxtion code to deliver the processing requirements:


This gives a high code SNR and low line count, all the code is business logic focused. To achieve this Fluxtion makes use of method references and type inference. The method references allow Fluxtion to infer the desired behaviour, what functions to build, the source and target types and how to pass data from one node to another in the execution graph. The method references give us a pleasant type safe way to express arbitrary logic. It is the inference employed by the tool that removes the load from the developer to explictly express every processing step, giving us a low-code environment to work in.


After Fluxtion generation the serialised streaming event processor is here, represented as java code. A test for the example is here.

Looking closer at the first line in the example above, select(TempEvent::getTemp), we can examine the inference that Fluxtion is making. The logic implied here is:
The map, notifyOnChange and push functions are steps added to the execution chain. See the Wrapper interface of Fluxtion streaming module for details. Due to the high SNR it is easy to understand their purpose and effect, but for completeness:

To use method references on the TempEvent we first need to define a getter/setter style accessor method pair. Of course ide's can generate the required methods, but the SNR will still drop after the generation. Expand this to a larger domain and the problem multiplies. Lombok can come to our rescue here, removing unnecessary code and restoring our SNR.

Adding a single @Data annotation removes the getter/setter and the @AllArgsConstructor removes the constructor:

Even with this smallest of examples using Lombok and Fluxtion together the actual business logic is much easier to read. A better code SNR makes the application more efficient to build and easier to understand.

Let’s extend this to a more complex example where the value of a high SNR becomes apparent. In this example we are processing flight data for a whole year. The example was inspired by this blog, and the code for the akka streaming solution is here. The summary of requirements:

Process a year's worth of all US flight landing records stored in CSV format here.
We need to define data types and processing logic to solve the problem. It would be easy to be overwhelmed by the noise in the solution. But Fluxtion allows us to concentrate on the business logic and Lombok makes the data types easy to work with, both tools using inference to reduce the code to write:

Lombok allows us to deal with data classes and field types, ignoring the scaffolding of getters/setters. We define an input record, FlightDetails and the grouping summary record, CarrierDelay.

The use of the var keyword for intermediate instance assignment simplifies reading and writing the code.
The calculations are stateful and have unique values for each carrier, every time a FlightDelay record is received the calculations update for the relevant carrier.

Executing the flight analysis for 2008, unzip the flight csv data and pass file location to the executable jar in the distribution.

Comparing the two solutions we observe the following:
It is difficult to compare performance numbers, the Akka version talks about a minute to run the example, but I do not have sufficient Akka experience to validate this. Additionally it is an old blog, so the situation has probably moved on.

We set out to demonstrate that java can be a terse language for event streaming if we select a good set of tools to use. Lombok and Fluxtion combine elegantly, allowing declarative definition of processing logic to be both simple and type safe. The use of var makes the code even more readable and easier to write. The key to all of this is inference, each tool infers a different type of behaviour and all of them save the coder from having to explicitly specify it:

In the case of Fluxtion we compare how the Akka version requires a processing graph to be explicitly defined by the developer. This does not scale for larger more complex situations and will be a source of errors. Even worse the business logic is being obscured with technical infrastructure, making maintenance even more costly in the future.

As a final note the performance of the solution is excellent, processing 2.6 million records per second with zero gc. I hope you enjoyed the job and will be tempted to try Fluxtion and Lombok out.

AllSimon on github, his comments while contributing to Fluxtion led me to experimenting with Lombok

Popular posts from this blog

Introduction Welcome to event streaming unplugged, this is the first in a series of articles covering the topic of realtime evemt stream processing. This is a practical programming series with resources at unplugged part 1 . What you will learn in these articles: The basics of unbounded event processing Functional reactive programming introducing concepts like map, filtering, groupBy, flatMap Constructing directd acyclic execution graphs Managing event streams of heterogenous types Imperative event programming, integrating application code Input and output Building, testing and deploying Auditing, logging and debugging event execution flow This article starts with a simple hello world and then moves onto a more complex example. The second example calculates the mark to market value for a set of traded currency pairs. Two independent event streams, instrument market price and executed trades are processed. Batches of trades and reset signals are also supported. A more complex example se
Read more 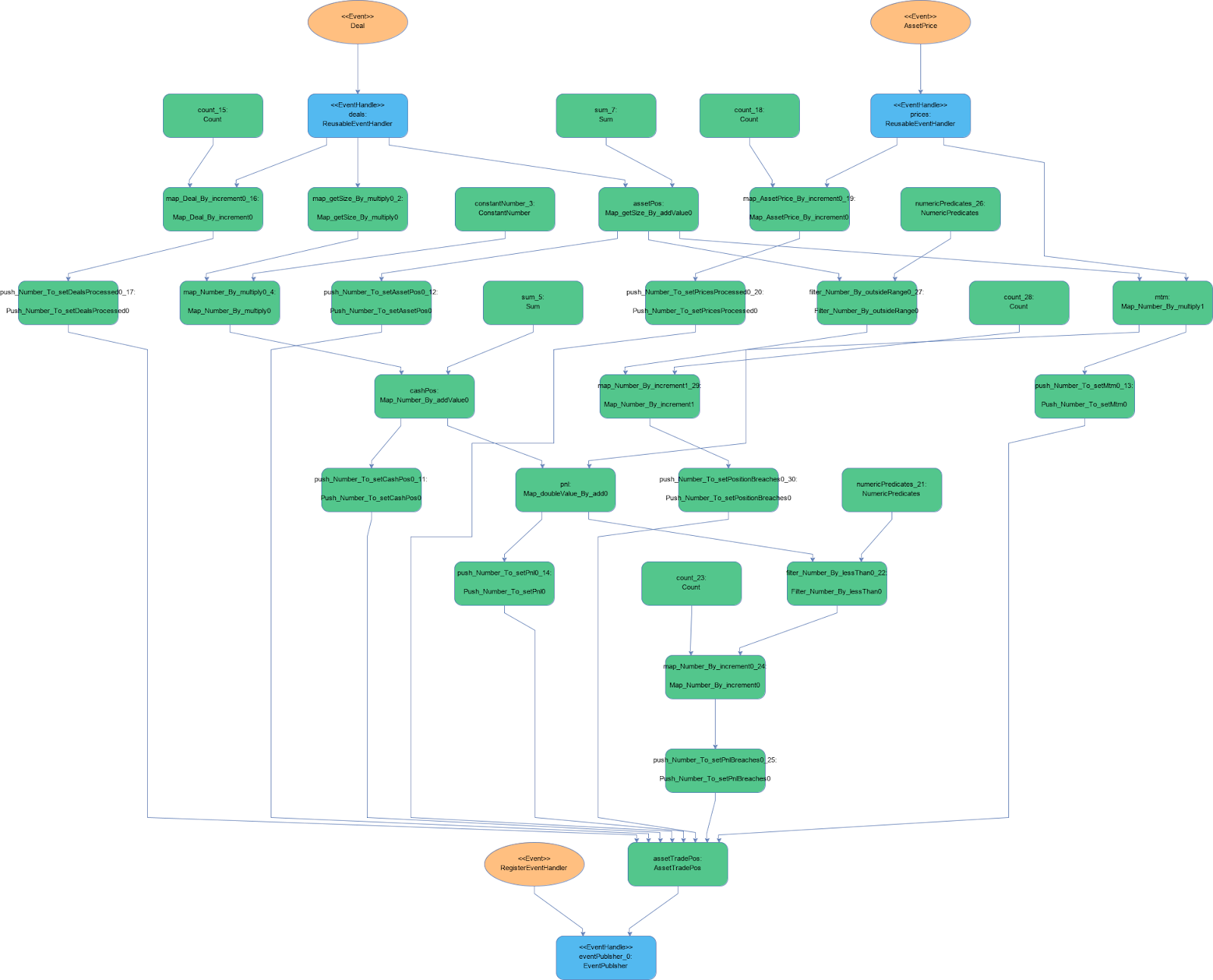 This article documents solving a meaningful event processing problem in a highly efficient manner through the reduction of waste in the software stack. Java is often seen as a memory hog that cannot operate efficiently in low memory environments. The aim is to demonstrate what many think is impossible, that a meaningful java program can operate in almost no memory. The example processes  2.2 million csv records per second in a 3MB heap with zero gc on a single thread in Java . You will learn where the main areas of waste exist in a java application and the patterns that can be employed to reduce them. The concept of zero cost abstraction is introduced,  and that many  optimisations can be automated at compile time through code generation. A maven plugin simplifies the developer workflow. Our goal is not high performance, that comes as a by-product of maximising efficiency. The solution employs Fluxtion which uses a fraction of the resources compared with existing java event proce
Read more

Serialize your lambdas for a rainy day - save to file

- July 16, 2019
Introduction A short post describing how a Java lambda can be persisted to a file for re-use in a different process. I then discuss how we use this technique in Fluxtion. Serialising Lambdas Lambdas, introduced in Java 8 make functions first class citizens(nearly) in the Java language. They remove the need for a dedicated class to hold a function. But how does this work under the covers? In reality javac hijacks the class containing the function adding a static method that contains the implementation of the lambda. The lambda call site is replaced with an invocation to the newly added static method. For a full description of the lambda implementation magic see this article . Oracle helpfully provides the SerializableLambda class that implements the serializable form of a lambda, providing enough meta information to reconstruct the call. All we have to do is cast the lambda to a Serializable and then use the standard java machinery to marshal the lambda. Below are a couple of
Read more